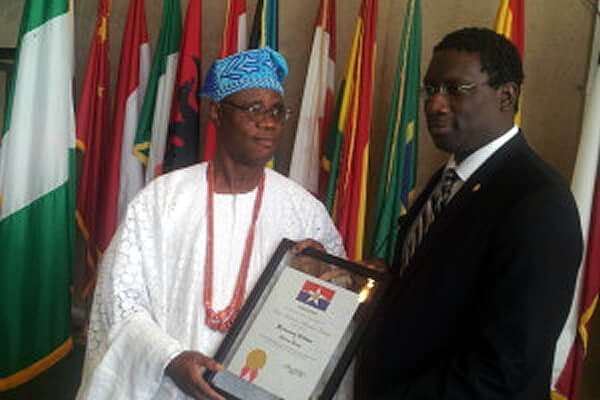 The City of Dallas, Texas in the United States has given a Honorary Citizenship Award to the paramount ruler of Ondo Kingdom, Oba (Dr) Victor Kiladejo, Osemawe of Ondo as a result of his outstanding achievements as a monarch in Ondo state.

The award was presented to the Ondo monarch by the Deputy Mayor of Dallas City, Mr. Erik Wilson, at banquet hall of the Dallas City Hall.

By this Honorary Citizenship Award, the monarch, Oba Victor Kiladejo, automatically becomes a honourary citizen of Dallas in the State of Texas, United States.

While receiving the award, the monarch who was flanked by some of his chiefs, leaders of Ondo Community in Dallas as well as the Spokesperson for the Ondo Vision 2015 (Diaspora Unit), Mrs Kemi Fadojutimi, said that his community would work hand in hand with the City of Dallas in order to ensure developments in both cities.

Oba Kiladejo added that his leadership as the paramount ruler of Ondo Kingdom was making efforts to ensure that the town becomes a mega city by the end of 2015.

He expressed gratitudes to the government of Dallas City for the honour bestowed on him as a honourary citizen of the region.

Kiladejo however urged the authorities of Dallas City to take a visit to Ondo in order to behold the potentials therein.

In his response, Deputy Mayor of Dallas, Mr. Eric Wilson, thanked the monarch for deeming it fit to visit his office, stressing that his City would be looking forward to engage in developmental projects with Ondo Kingdom.

Also speaking, Mr. Oshin Oking Habib, Social Director of the Ekimogun association in Dallas, said that the association would continue to promote the good name of the town.

The Monarch also held a meeting with officials of the Office of the Mayor of Desoto City where discussions on how to establish a strong trade relationship were held.

Kiladejo being a medical doctor also visited the Baylor Institute for Immunology Research as well as the University Teaching Hospital in the City.