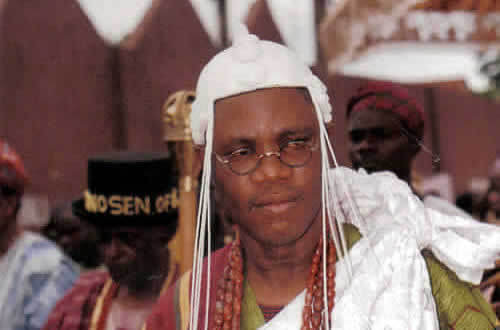 It was a privilege to have had the honour of associating with His Royal Majesty before he ascended the throne of his forefathers. We became close through a mutual friend and in the process we related very well.

My impression of him are that of a commited family man, bible inspired Christian and a selfless individual.

Kabiyesi has very innocent look but one will only misjudge the look at one peril. He is like the biblical prudent man who is gentle as a dove and wise as a serpent.

He is curious intellectually, steadfast and tenacious in his quest for more knowledge not only in medical world but generally. His depth of knowledge is fantastic. He is always craving to know more. Kabiyesi even on the busy throne will hardly allow any rich reading material to pass him without having a good look at it. Kabiyesi is highly purposedful of insight and vision. He is indeed stupendously thoughtful. I cannot agree less with Sir, Francis Bacon when he said that “reading makes a full man”

Kabiyesi believes in service and this readily explain why he vied for the throne. For him to have left his thriving medical practice for the throne says a lot about his depth of love for service. It was indeed a great sacrifice. This is only a reminder that a life withdrawn from service to others becomes quite useless. He definitely believes that he has a lot to add to the well being of his place of birth and for this, he gave up his medical practice. As Henry Ward Beecher (American Clergyman) said “In this world it is not what we take up but what we give up that makes us rich”. There is no doubting the fact that Kabiyesi has impacted positively on his kingdom.

I will commend the admonition of Sir Winston Churchill to the sons and daughters of the great Ondo Kingdom where he said “If your leader faulter, support him; if he stumbles help him to his feet”. As mortals, we are not infallible and as Henri Avlock said “The absence of flaw in beauty is in itself a flaw”.

Kabiyesi, long may your reign be on the throne of your forefathers and the divine protection of the one and only wise indivisible God will be upon you and yours at all times, Amen.