MEMORANDUM SUBMITTED TO THE HOUSE COMMITTEE ON TERTIARY EDUCATION AND SERVICES, NATIONAL ASSEMBLY, ABUJA FOR THE CALL ON THE FEDERAL GOVERNMENT TO REVIEW THE DOWNGRADE OF FOUR COLLEGES OF EDUCATION WITH PARTICULAR REFERENCE TO THE ADEYEMI COLLEGE OF EDUCATION, ONDO 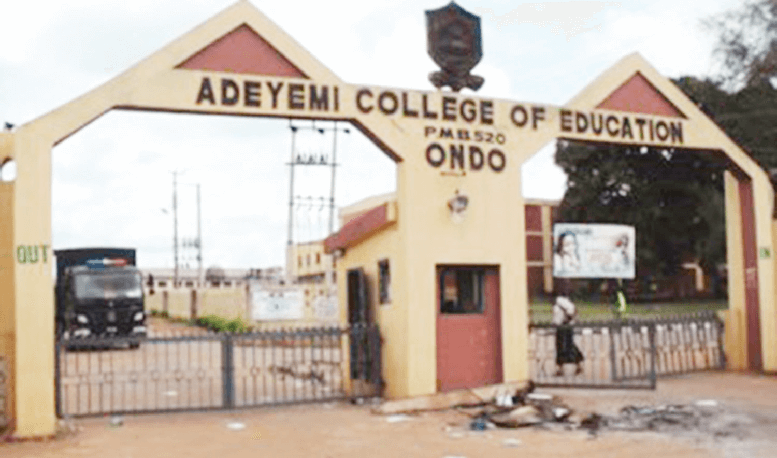 MEMORANDUM SUBMITTED TO THE HOUSE COMMITTEE ON TERTIARY EDUCATION AND SERVICES, NATIONAL ASSEMBLY, ABUJA FOR THE CALL ON THE FEDERAL GOVERNMENT TO REVIEW THE DOWNGRADE OF FOUR COLLEGES OF EDUCATION WITH PARTICULAR REFERENCE TO THE ADEYEMI COLLEGE OF EDUCATION, ONDO

It is a great delight to submit this memorandum to the House Committee on Tertiary Education.   Administering our dear country at this difficult time, I must say, is an onerous task.  Success will only be achieved by positively-resolute minds who are gravely focused and ready to see this national task to a logical end.  I am of the opinion that such are the minds that constitute the membership of the House Committee on Tertiary Education.

I hereby use this opportunity to point the attention of the honourable members of this committee to a matter that is of great concern to all the people of Ondo Kingdom and the entire Ondo State.  This pertains to the putting on hold, the well-deserved University status of Adeyemi College of Education.

Adeyemi College of Education is located in Ondo City.   Ondo is an ancient settlement located about 48km from Akure, the Ondo State capital and sits about 300km to the northeast of Lagos.  The southwestern city of Ondo is easily accessible by road from all parts of the country.

Ondo is rich in agricultural resources and is the largest centre for the cultivation and processing of cocoa in Nigeria.

They are also a very significant and exposed Yoruba subgroup numbering up to about half a million and known for their thirst and quest for education.  Interestingly, the town is home to the first community secondary school in Nigeria and the oldest secondary school in southeastern Yorubaland (Ondo Boys High School founded in 1919).  Ondo City is proudly the hometown of many illustrious sons including three nation merit awardees in medicine (Prof. Oladipo Akinkugbe), engineering (Prof. Ifedayo Oladapo), and geology (Prof. Sylvester Adegoke).  The royal portrait painter, Chinwe Chukwuogo-Roy, MBE, who painted the official portrait of Queen Elizabeth in 2001 was born in Ondo as well as many others who have done the city and country proud home and abroad in different walks of life.

The issue of the conversion of Adeyemi College of Education to a university of education had been ongoing for a long time.  About ten years ago, a special committee was constituted to look into ways of improving access to university education.  Part of the recommendation of the committee was that six Federal Polytechnics and six Federal Colleges be converted to Universities of Technology and Universities of Education respectively.  In view of this, I hereby propose that government effects a release of the hold on the university status of Adeyemi College of Education, Ondo, a status which all stakeholders believe is due on the grounds below.

The College also has a reputation for being the foremost teacher training institution in the country. The fact that this reputation has been sustained over the 52 years of its existence shows consistency of purpose and an abiding faith in the visions of the founding fathers of the institution. It is noteworthy that the College has produced many eminent personalities in Nigeria who are doing very well in various fields of endeavours.

Since inception, the College has experienced growth in its academic programmes. The College which began as an NCE-awarding institution in 1964 started awarding degrees in 1982, in affiliation with Obafemi Awolowo University Ile Ife. The College has had close to 100,000 enrolment for its degree courses since 1982, graduated more than 10,000 degree students, and has had about 1000 intakes for the PGDE programme since 1993. It is also a fact that most of the courses offered in the College have been accredited by the relevant regulating agencies. Also in conformity with the third objective of the founding fathers of the College which was to foster research into matters pertaining to education, the College currently operates a Directorate of Postgraduate Studies and Research. The College also qualified, after evaluation of her facilities, as centre for the National Open University of Nigeria between 2003 and 2008 before the latter relocated to its permanent site in the state capital. In addition to this, the College has over twelve regularly published academic journals.

In line with the expectations of the founding fathers, Adeyemi College of Education has supplied a steady stream of teachers and professionals to various sectors of the nation. As far back as 1964, the College could boast of teachers who met up with international standards.  In a world where those who rest on their oars will quickly become irrelevant and soon be left behind, all staff of the College are scrambling to update and upgrade themselves professionally. Today, 52 years later, the College is to proud to have about 105 PhD holders, much more than other many other Colleges in Nigeria.  There is currently virtually no department in the College where the teaching staff are not pursuing their PhDs in reputable institutions around the globe. These staff could as well bag their PhDs right in the institution where they work and in an environment they are familiar with if it were a University. The College can also boast of many seasoned chief lecturers who are qualified to become professors among the 360 teaching staff and about 600 non-teaching staff.

It is a very crucial fact that the College was administered by OAU for a period of about 20 years and in all these years, the criteria for academic staff recruitment into OAU was applied to the College. A huge number of that staff is still being maintained by the College and have upgraded themselves with over 30 who have served as visiting lecturers in universities across the country. This is corroborated by the 1999 Yabani Report on Higher Education which confirmed that the staff of Adeyemi College of Education among three other Colleges ‘…have performed and compared favourably well with those in the University of affiliation.’ Although the certificates for degree courses in the College are awarded by OAU, it should be noted that these courses are taught by the lecturers of the College who already have a good deal of exposure to university culture.

There are over ten lecture theatres for students’ use in the College. This is in addition to the departmental lecture rooms, libraries, studios, laboratories, workshops and office accommodation.

The College library has a book stock of about 30,000 and over 2,000 journals. It also has a functional 500-seater virtual library complex and the process to fully automate the library services is near completion.

The College Farm, under the Department of Agriculture, has about 5 hectares of land for teaching and research. This farm has poultry, rabbitry, piggery, and crop production units and has served as research facilities for students even from other institutions.

There has been an overall tremendous improvement in the infrastructural facilities in the College and there is an abundance of land space available for expansion of these facilities as only about 50 hectares of the 270 hectares in holding has been developed. The College has also commenced a series of processes to elevate the status of the College and to bring it at par with international institutions through initiatives such as student and staff exchange programmes, winning international grants and partnerships with reputable institutions abroad, partnering with world organizations to make ACE the agricultural hub of Ondo State.

After expending so much energy over the years by different stakeholders, the Federal Executive Council, on Wednesday, 20th May, 2015, pronounced Adeyemi College of Education a university alongside three other Federal Colleges of Education.  The College then became known as Adeyemi Federal University of Education.  This development was the fulfillment of a long-term aspiration of the people of Ondo Kingdom and State.  Between the month of May and August, 2015, our institution was a university.  However, in a dramatic twist of events on 7th August, 2015, the Federal Government decided to put the university status on hold apparently with a view to properly reviewing the modalities involved in the transition of the concerned colleges of universities.

I wish to draw the attention of the distinguished members of the House Committee on Tertiary Institutions and Services to the fact that the 2015 pronouncement which granted full University status to the College brought tremendous joy and happiness to the entire people of Ondo Kingdom and beyond.  However, the announcement which had put the upgrade on hold has brought sadness and depression to the people of our community.  I therefore appeal, on behalf of our people for the restoration of our joys in Ondo Kingdom.

As a major stakeholder, I feel the time to release this hold has come.  The entire people of Ondo State look up to your committee in particular and the entire membership of the House of Representatives in general to accomplish this feat to which they would forever be grateful.   This would serve as one of the greatest contributions to the educational development of Ondo State and Ondo Kingdom.

Thank you very much,